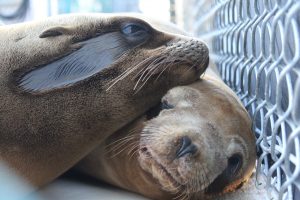 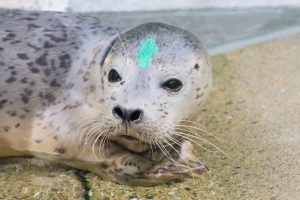 The Marine Mammal Protection Act of 1972 (MMPA) is a body of U.S. laws designed to protect marine mammals and their habitat.  Species protected include whales, dolphins, seals, sea lions and walruses.

National Marine Fisheries Service (NMFS) is a federal agency responsible for implementing the MMPA, and for the stewardship of living marine resources and their habitat.  It is a division of the National Oceanic and Atmospheric Administration (NOAA)

In 1978, Marineland of the Pacific opened its Marine Mammal Care Center and incorporated a docent program, Organization for the Respect and Care of Animals of the Sea (ORCAS).  In 1980, ORCAS was sponsored by Union Oil Company.

In 1987, Marineland closed; arrangements were made to build and to open Marine Mammal Care Center in Angels Gate Park in San Pedro across from Fort MacArthur. This was a collobaration with the purchaser of the Marineland property and Los Angeles Unified School District (LAUSD).

Between the time Marineland closed and construction of the current site of MMCC LA, care was still provided for stranded animals. ORCAS operated a first-aid station at Dockweiler Beach; in 1991 it moved to a converted horse trailer at the  former Marineland site and the more serious cases were transported to Sea Worldís rehabilitation center in San Diego.

Marine Mammal Care Center at Fort McArthur officially opened on October 1st, 1992 and was managed by the Foundation for Marine Animal Husbandry, a Florida 501(c)(3) organization.

On September 1, 2016 our new nonprofit organization assumed responsibility for this vital hospital.

MMCC LA has a multi-faceted education program, operating partly in conjunction with LAUSD to educate students, teachers, and the general public about marine science and the animals cared for at our facility.

The goal is to increase public awareness on various environmental issues and the importance of ocean conservation through outreach activities and docent-led tours. We also send our Mobile Visitors Center to community events, and speak at Rotary Clubs, Chambers of Commerce, Neighborhood Councils, schools and social groups.

MMCC is part of the Oiled Wildlife Care Network (OWCN), along with 36 other wildlife rehabilitation organizations statewide and is one of the primary care facilities.

In the case of an oil spill within the Los Angeles or Ventura County area, MMCC would be involved in the wildlife response by stabilizing, washing, and caring for any marine mammal exposed to petroleum products in their environment, working under the Office of Spill Prevention and Response (OSPR).